Skip to content
https://www.youtube.com/watch?v=q9_PUF7od_k&t=15s
This post may have affiliate links. We earn a comission if you make a purchase at no additional cost to you.

In my cat butler life, I’ve gone through too many scratching posts/boxes/cat towers to count and there’s always one thing they have in common. They become a mess within about a month or so.

Makes sense though, I assume not many products can withstand the accumulated scratches of 3 cats (Now 4…) in that time span and in such a tiny space.

Anyways let’s begin. Long story short, my last scratching post snapped a long time ago. Due to some rough play so the cats needed something to direct their little claws on and needed to get something fast because the underside of the couch was their next target. So I ended up discovering this scratching post online and figured I’d give it a try because of all its raving reviews!

From what I gathered, it seemed to be something that was durable enough for multiple cats to use and small enough to keep somewhere that was unobtrusive in my studio apartment here in Korea. So I decided to put it up to the test and one year of use later…

Cats scratch out of necessity and instinct. However, what might not be known is that they have certain preferences and requirements that need to be met for them to scratch it regularly and consistently. This is important because if the scratching post is not satisfying these preferences, they’ll search for other things that might.

So it’s finally time to review this scratching post. The ultimate scratching post is quite the name and it seems quite fitting now that I’ve used it for so long. It outlasted every cat product in my apartment and probably will continue to be used until…well I have no idea. It’s lasted so long that I just expect it to keep going like this.

Important note: I am not sponsored at all and doing this review because I like the product and am willing to recommend it to all cat owners out there. Especially those that are in apartments/studio apartments because having this one scratching is enough.

How Long Does It Take to Build and Assemble?

If there’s one thing I’m starting to hate, it’s assembling cat towers. I really disliked having to assemble and it hurts the eyes to look at instructions for long periods of time.

I was dreading the assembly when I opened the box to this thing but it was actually not bad.

It was only a total of 4-5 parts. It was a quick assembly and literally only took me 10 minutes screwing a couple of things together.

Most cat-scratching posts were honestly too light and got knocked over all the time and thankfully this one had a stronger build to it. The base of it was wide and didn’t allow for sway or other types of movement. So the cats could rest on it with their full weight and not have it be pushed around.

It’s almost a meter high (0.8m) and even has a platform at the top for the cats to perch on! Actually, I am quite shocked about how often my cats use it as a perch. Whether it’s to get away from their annoying friends or to greet me in the morning! Put it in high traffic areas for the best effect and optimal usage from your cats!

How Long Does The Ultimate Cat Scratching Post Last?

One year after, this post looks almost as new as the day I assembled it. The sisal material for the main part of the scratcher still looks great and has never ripped even once.

With many other cat towers and cat scratchers, there are always some pieces of the material that falls down that need to be vacuumed or cleaned up. Eventually, after a month or sometimes a couple of weeks, it becomes super ugly to look at with holes and with rips everywhere.

In general, it’s going strong and I don’t feel the need to replace it any time soon. From time to time, however, I would recommend taking the tool that came with the box and tightening up the base again as it can become a little loose after extensive usage from the cats.

The next best thing about this scratcher is that it is very space-efficient. The thing takes almost no space. I’ve had cat litter boxes take up more space. In a studio apartment with 4 cats, this is crucial. There must be well-defined spaces where the cats can play and have fun but still respect my own space as well. This is all up to the room layout and this compact cat tree really fits in well.

In my apartment I need to maximize my space but still, need to have the essentials for owning a cat. Part of that is having a good place to scratch. Cat towers are way too large for my type of space. Its size and design make it easy to place anywhere and have it look like it’s part of the room.

The color of this also makes it easy to plan for as it is neutral-colored. It can fit in any type of interior and look great!

How Much Does It Cost?

The Ultimate Scratching Post is sturdy and strong and just only about 10-20 dollars more expensive at around 30-40 USD depending on the sales and region! So spend the extra 10-20 dollars and get something that lasts!

Most scratching posts cost between 10-20 dollars USD. Those are just average run of the mill scratching post that is made of cardboard or poor quality material.

The moment the Ultimate Scratching Post was built, some of the cats were already itching to scratch it. All it took was a little bit of catnip for all of them to starting giving it attention and realizing it felt damn good to scratch on it.

And so ever since then my computer chair and couch were given a break and I rarely see them intentionally scratching my other furniture. There are days when they get too excited, however, but that’s few and far between.

I mentioned above that one of the things I wasn’t expecting was how often they used it as a perch. It’s a good height for them to greet us and survey the surroundings (if put in a key area).

Cats are quite territorial, it allows them to know what’s going on and have a point of escape if needed. If I had a larger apartment or house, I would put one of these in every room.

Scent marking and perches give your cats confidence in their environment and as I always say, a confident cat is a healthy cat.

As we know, cats are also very careful. They don’t like unstable things. It causes them anxiety. Whether it’s their sleeping area or their scratching post.

Why do you think most cats choose the couch as their main scratching zone? It has a huge base and allows them to do whatever they want to it and it won’t budge.

Luckily this scratching post allows them one thing that couches don’t provide. A high enough elevation for them to stretch out their whole bodies. Couches are too low to provide that.

There honestly is not much more I think that could be improved here. Everything is so well built that I think it deserves the praises that it gets.

I think the only thing that I would love to see, is some different heights. I would love one that was maybe 30-50% higher to have the cats do a little climbing or something. Though I understand it might be a little unstable at that point.

If it had some different height options, I could have bought multiples of these and easily created a stepping path for them to climb like stairs!

If I were to continue to nick-pick maybe some different color options, though this current color combination works well with almost everything.

So far I’ve used this for about 1+ years now and it doesn’t look like any wear and tear is getting to the post just yet. It has been used almost every day, multiple times a day and it still looks great. While the price for these was a little bit more expensive than other scratching posts (only about like 10-15 dollars more), it was incredibly worth it. As it not only lasts for a long time but saves your other precious furniture from being ruined.

There are not many products I would wholeheartedly recommend universally for cat owners. This, however, is so well thought out and built that I think every cat owner should have at least one in their household. As it not only serves as a cat scratcher but so many other things that I didn’t expect.

At a great price and quality, I think every cat owner should own this. Now, how many scratching posts are needed in your home? This might help! 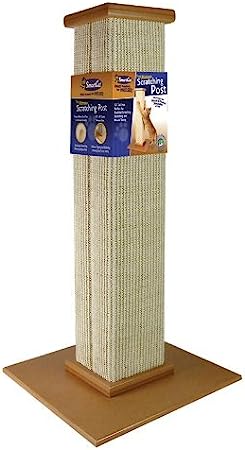 An appropriate name for this cat scratcher. Durable, stable, and tall enough for our cats to stretch out. It really is the best vertical scratching post. I've used this cat scratcher for years and it's still being used daily today.